This month is our celebrity special, reminding you that celebrity is most definitely not dead with the trends and insights to prove it

Celebrity is not dead 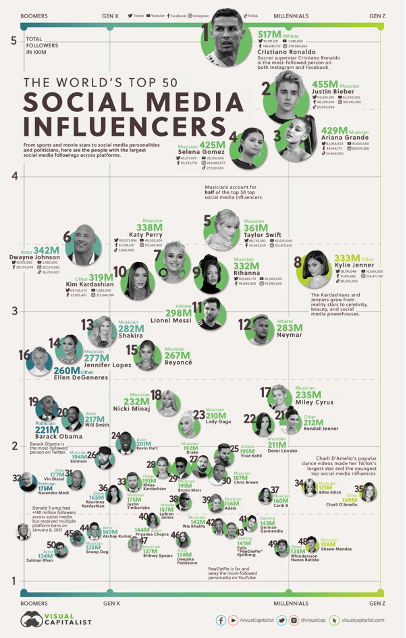 88% of the top most followed Instagram accounts are celebrities

We’re living in a digital era where the success of a brand campaign, whether digital, social or other, relies on getting the marketing mix right and really understanding how consumers of the product engage with content and whether they can relate to the person marketing the product or not.

With this in mind, many marketeers and brands favour using Influencers or celebrities to endorse or market their product to consumers in order to maximise reach, engagement, recognition and capitalise off of their respective online and offline audiences and fans.

The last three years, as a result of Covid and everyone being at home, has seen brands increase their use of Influencers to market their products online and digitally which has left many asking the question, is celebrity brand endorsement dead?

In the current marketing landscape if the goal of your integrated brand campaign is to attract attention, improve the company’s image and get mass reach, then adding a celebrity to the marketing mix can really make all the difference. Taking into consideration the influencing power of a celebrity and their reach is key when deciding which celebrity to work with.

The use of celebrity needs to be authentically integrated into the creative ad brand message and ensure that they’re still heavily featuring the products authentically. A brand that did this well was Uber Eats, which saw an increase of 162,000 additional searches online following the airing of their Super Bowl ad which featured stars Trevor Noah, Nicholas Braun and Gwyneth Paltrow.  The ad copy was specifically written for them as they helped create the story and the conversation. A well-executed campaign is not just about a product being marketed but a story being told which consumers are at the heart of. 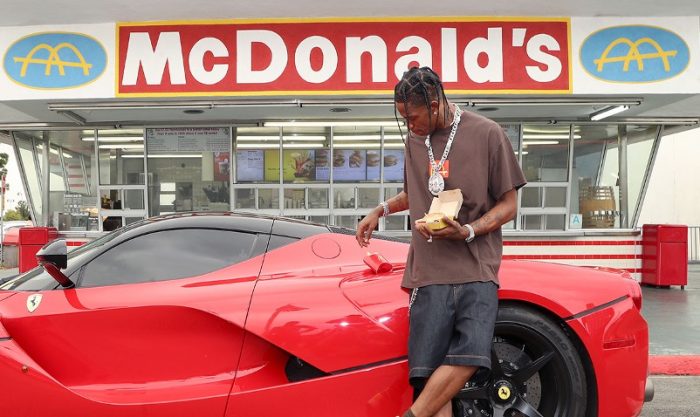 McDonalds hadn’t engaged in a celebrity collaboration since 1992, but in 2020 they teamed up with Travis Scott and saw a 4.6% rise in sales and 20% increase in app downloads. 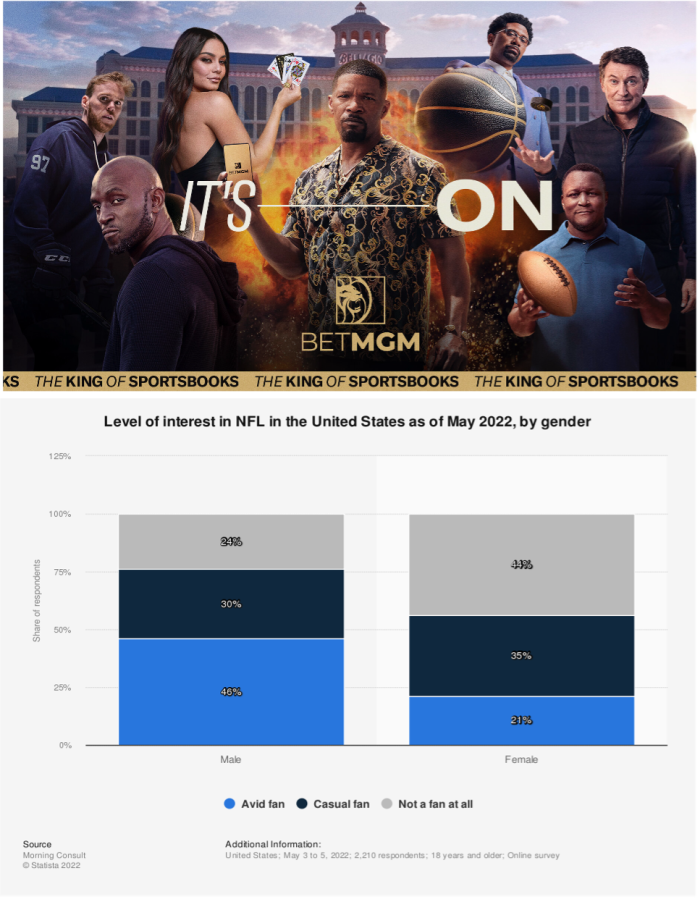 Across a basket of 13 of the world’s most popular sports, women make up 47% of highly engaged, passionate sports fans

Nearly 80% of women watch live sports online or in-person. While community is important, they identify more along team not gender lines

In a world of limitless content, clutter breakers provide differentiation. Live sports, and the NFL specifically, is generally considered the most DVR-proof programming out there and maintains one of the more diverse audiences across demographics. One way many brands have tried to rise above the clutter is with celebrity usage. 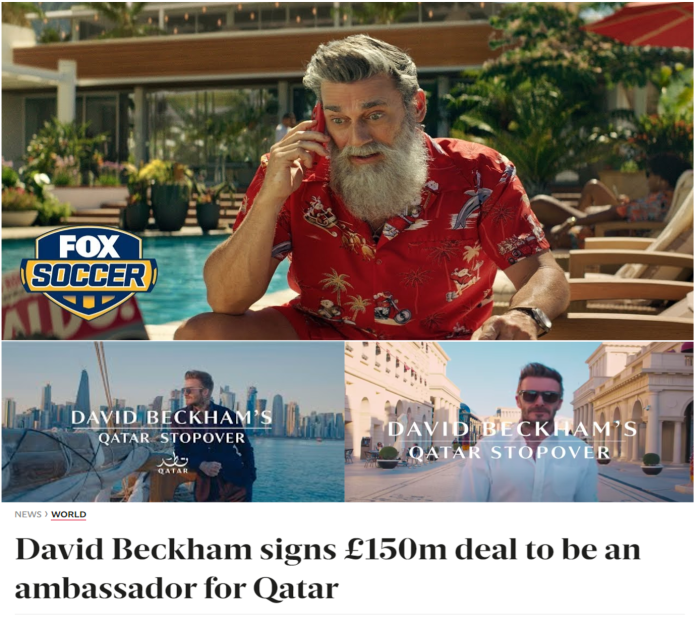 Celebrity ambassadors have been associated with brands for decades. The association is when talent embody the brand spirit, mission and are used across many forms of marketing. To work effectively the talent needs to care about, be a fan of, or use the product/service they are acting as an ambassador for.

Jon Hamm is currently starring as Santa Claus for FOX and their FIFA World Cup kick-off campaign – This will be the first time that the World Cup will take place during the holiday season. Santa Claus is perhaps the most interesting celebrity of all time. He is universally known (by a few different names), can’t get into trouble, cause brand harm, and his IP requires no license or fee! 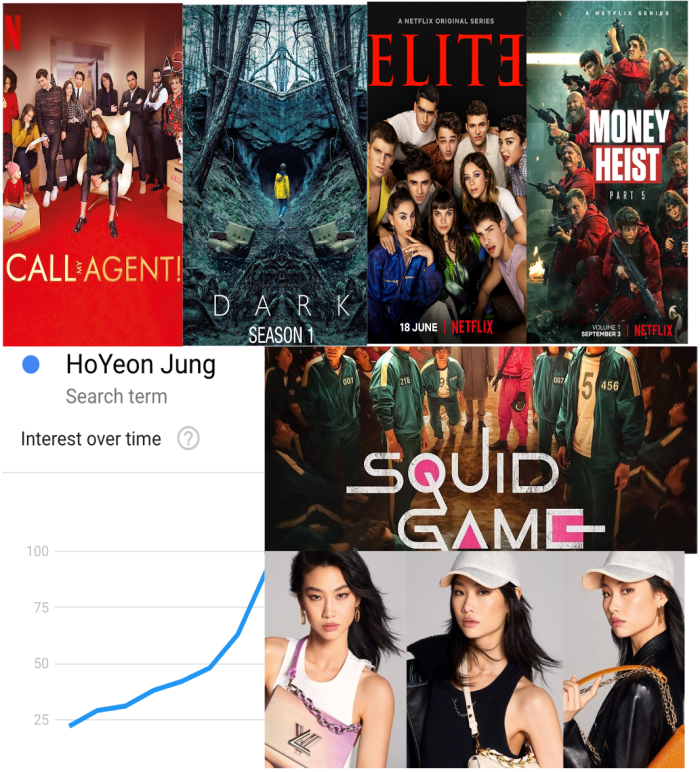 Foreign shows like Money Heist and Elite from Spain, Call My Agent from France and Dark from Germany are producing a new layer of talent with a global reach that differs to your traditional US or UK talent that we all are familiar with and come with huge followings

Streaming platforms like Netflix allow stars to grow across new markets, outside of their home countries, creating the “new celebrity.” Just a few years ago, it would be incredibly difficult for stars from outside of the USA or the UK to make waves across international waters. The power of social media has changed that, with celebrities finding new ways to span the globe. These stars come with huge followings –star Manu Rios from Elite collected 10 million social media followers within only 6 weeks while first appearing on season 4 of the show.

Foreign shows which are produced in their own languages and are dubbed launched at the same time have the power to generate a cultural conversation across borders, which is further driven by social media algorithms.